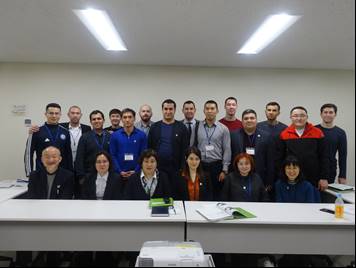 The “Knowledge Co-Creation Program (Young Leaders)” was conducted by JICA under a technical cooperation scheme of the Government of Japan, with the purpose of promoting human resource development in developing countries.

Under the program, young leaders, who will become nation-building leaders in the future, were invited to Japan with opportunities to:

1. Develop their specialties through experiencing and learning technologies and skills in Japan, and

2. Increase their willingness to resolve issues on their own.

During our stay in Tokyo, a study tour was organized to the Tokyo Metropolitan Government and we were provided with full information about the structure of the board.

After moving to Nagoya we participated in lectures conducted by representatives of various government organizations in Japan involved in the development of SMEs.

By the principle of combining the useful with pleasant, we were organized instructive and at the same time very entertaining tours to the Toyota Memorial Museum of Industry and Technology and Factory of Toyota Motor JCS; Nagoya Castle; Zhoyful farm, where we were given an opportunity to taste the most delicious strawberries in Japan.

And also we had a chance to visit and get acquainted with the working environment of the following enterprises:

-JETRO- Japanese Organization for the Development of Foreign Trade

-The company “Kuzuri-Kzori” and etc.

As well as a meeting was also held at the Okazaki City CCI. During the meeting, the role of chambers of commerce and industry in the industrial development of the regions was discussed and examples of development and expansion of production with the support of the CCI were given.

During visit, the opportunity was not only to improve my knowledge and experience in the field of SMEs in Japan but also an irreplaceable way to learn more about the history, traditions and customs of Japan. For this reason, on the weekend I went to the thousand-year-old capital of Japan. By organizing a trip to Kyoto, I got a chance to see the cultural capital and the heart of traditional Japan.

Eventually, I would like to express my deep gratitude to the JICA and government of Japan giving me the opportunity to take part in this training course.