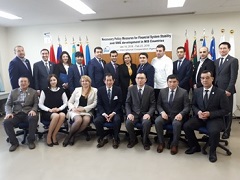 From January 28 to February 24, we have attended at the training course organized by the Japan International Cooperation Agency (JICA) on “Necessary policy measures on financial system stability and SME development in NIS countries”. Participants of the course were from Post-Soviet countries and represented mainly the Ministry of Economy, Central Banks and Ministry of Finance. During the training course, we have participated in lectures provided by the representatives of the various government organizations of Japan involved in preparing policy measures for the development of the SMEs. Furthermore, we have visited the Agency for SME Development, Japan Finance Cooperation, some local banks and the prefecture of Fukuoka to get acquainted with the implementation of the SME development policies at the regional level. Throughout the training course we have covered the topics such as:

Alongside learning Japan’s experience in development of small and medium enterprises, we also had an opportunity to get acquainted with the Japanese culture and traditions as such during our stay at the JICA center several cultural events were organized about Japanese dresses, tea traditions etc. Moreover, we have visited the Asakusa Shinto shrine, Tokyo Skytree, Imperial Palace area and State Museum of Kyushu in Fukuoka prefecture which left on us enormous positive emotions.

We also observed that Japanese people are very kind, punctual, law friendly and hardworking which I think are very positive traits. During our stay in Japan we witnessed hospitality from organizers and good attitude from ordinary people which were trying to help us when we had difficulties while traveling. We mostly stayed in Tokyo which is a good mixture of high buildings, green parks, old style city suburbs and well-developed metro system. All in all, I would recommend to all to visit Japan as it worth to see the beauty of the country and its unique culture.

We believe that knowledge that we have gained during the training course will be helpful in our daily work and contribute to the improvement of our policies with regard to SME financing and development.